It’s been ages since the last blog. Why? Take a wild guess!                      No internet and no time are the main culprits.  It’s time to catch up and so I’ll begin with how we rescued our main.  First let me say we did not buy a new main and have it shipped to Colombia.  We had a new main that was a few months old, and the head ring broke on our last day of sailing for the season as we entered Colombian waters.

It’s a long story, with so much angst, worry and bad energy that I won’t get into the details.  Let’s suffice it to say our sailmaker should have put the strong ring on that we requested and it slipped through the cracks. We paid the price.   2 mortgages in fact!    But we hope they will pay us back when we get home.  It’s the right thing to do.  You make a mistake, you own up right?  This could have had a much different ending if the ring had broken the night we were racing the clock in the pirate zones.  That was only 2 weeks prior! I digress.

The rescue is the interesting part so I’ll share that.

We decided when there was only one week left (after almost 2 months) before the Colombian customs would destroy, yes you heard it destroy our main, we’d fly to Bogeta from Panama and meet the agents who kept telling us not to worry. Week after week we would be told only one more paper, maybe we send it Friday.  These guys.  Nice guys, but we still don’t have a recipe for the first $950 we paid by bank transfer.  It’s Colombia.

We had a meeting in the AM with the 2 agents, and a translator on the phone who lived in Bogeta, who is a friend of an international judge for sailing, and was contacted via FB. The translator let me know something sounded fishy. Indeed.  But what to do.  We told them we wanted to go directly to DHL as we had already tried to go through DHL USA who said they could not help us. Neither could the shipper in Miami who is known for international shipping. Eric and I would camp out until they released the sail.  The translator said he had family that could help if this didn’t work so we had a back up. Nothing like family in Colombia!

It took all day, and several men running around trying to figure it out, but $2300 in cash later, we saw the sail come out of jail.  It was promptly loaded into a truck of a customer we met in DHL who befriended us.  He told us when he saw us sitting there he was very curious, saying he felt we did not belong there.  He was right!

After loading it onto Copa Airlines in the cargo area, we all headed back for a beer to celebrate.  These guys were almost as happy as we were.  And the customs agent came too, saying our sail was a gonner if we hadn’t showed up.  WHY?  We will never know.  Too much paperwork and something about it being a fabric and the Chinese doing copyright infringements making them paranoid, blah blah blah.  3rd world BS where the cash helped.

So, the next step was how to get it to us in Panama without flying it here and having this possibly happen again.  Panama is easier, and yet we learned it also has its own problems with shipping. And by now as you can imagine we were trying to save ourselves time and more $. The best option was to send it on a boat.  There is a company that takes backpackers to the San Blas Islands twice a month.  Originally they said no problem.  Now they said they are full.  I begged them to bring it and reminded them it doesn’t eat, need a bunk, and won’t barf.  For $300 and a chuckle they said yes. We texted on WhatsApp and got the coordinates of where they would be and on which days.  The San Blas has very little cell service so we had to meet them or the sail would go back to Cartagena.

Our friends Teri, Sarah, and Diana arrived and the next AM we left at 4AM thinking we would be in SB by sunset.  It was much too rough, we had to slow down, and we arrived the following day after managing to catch a tuna that caught a shark.

It was such a sweet reunion!  We met Sovereign Grace and they hoisted it on to El Raton, and we took it back to it’s proper home. 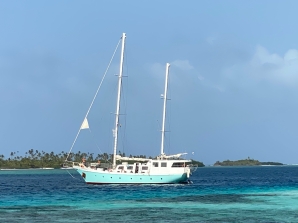 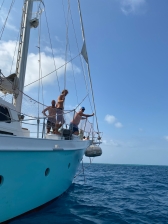 El Gato was finally all in one piece again, we could keep our Panama Canal transit date, our friends who had flown in could sail with us, and we could continue the dream of sailing across the Pacific.  First the Marquesas, Cook Islands, American Samoa’s, Fiji, and New Zealand in time for the America’s Cup! We had friends going a few days before us, and we could not wait to share this incredible adventure with them and friends and family and charters who would join us.

What could possibly go wrong?

One thought on “Mainsail Rescue”