Eric and I found a great place to leave El Gato while we took our fist trip home in over 5 months. Cartagena is a gem on the South coast of Spain. Across from the marina is an ancient amphitheater, and streets paved with marble.  The week we arrived was special and there were people in Roman costumes singing in the streets, there were fireworks at night, and music was everywhere. The Spanish know how to celebrate their saints and ancestors and they do it often! 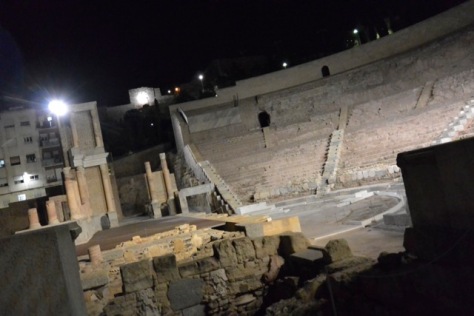 We had a lovely time with the Wakes and Halls and the best dinner was had at a place called the Catedral. Located next to the amphitheater, it had glass floors showing artifacts below. And the food? Well it was one of those places where they kept bringing things out that tasted better and better.

So how to recap so many miles and so many more stories that I may be already forgetting?

I will make a brave attempt and the photos of course will help tell the story.  But before I begin, I have to say that it’s been wonderful to be home in California seeing our family and friends. Two weeks is not enough, and my body chose this time to come down with the cold that everyone was passing around.  Funny how your body knows when it can take a break.  Anyway, we have been on the run all summer and it doesn’t look like we will stop until we come home for Christmas. Why the rush rush when we are so called “Cruising”? When you only have 5 months to see the Med it is not nearly enough. Some people spend their whole lives cruising the Med and we can see why. Each country has it’s own style, flavors, customs, and landscapes. The interesting thing is that we never saw any other Americans on our paths.  If they had an American flag, it was small and turned out to be Turks who were registering their boats in Delaware for the tax break. Smart Turks. It is going to be hard for me to leave Europe and we WILL return someday with or without El Gato. But no matter what, we realized early on that we can’t see or do it all however we did a LOT!  No regrets. This is not a dress rehearsal thats for sure!  And now we are preparing for the biggest sail I’ve ever come close to doing. There is a TON of things to do, buy, fix, make, find, and we are happily doing a lot of it while sitting at home in front of computers with access to all the goods in places like West Marine and Amazon.

In the past two blogs Cretia wrote about her experience, and I wrote about how unpleasant it was sailing to Cartagena. But I left out some good stuff because well frankly this blogging business takes some time and sometimes I don’t have much.

After Eric returned from Texas, we headed out at 8PM and sailed with Miss Catana for 2 nights and one full day. It was beautiful sail but the forecast was not good. We had to arrive before the big storms hit. And thankfully we did.

As soon as we pulled up to the dock and tied up, the heavens unloaded and we promptly went to sleep and slept like babies.

This is how the town looked on another day with blue skies, not how it looked when we arrived at dawn in rain.

Miss Catana arrived 2 hours later and that afternoon Lewie joined us for the next big sail, about 750 miles.

This was to be our shake down cruise. Did Lewie REALLY want to sail across the Atlantic with us? We hoped so and all of us needed to be together and sail together to decide if we indeed had the right chemistry.  It’s one thing to be friends with someone, it’s another to live with them, depend on them, and not get tired of being around them day after day.  On a boat that gets smaller all the time. Everyone not only survived this test, we thrived! Our morning ritual started with the greeting of “Good Morning Captain, Good Morning Captain, Good Morning Captain”.

When we started to head north we spotted something in the water. Everyone has been asking if we’ve seen any refugees and the answer is no. But this made us think about the storm and we hoped that whoever owned this little fishing boat was safe and sound on shore or on someone elses boat.

Needless to say the men loved the name.

Soon after we passed through the Messina Straights where Swordfish are common, we caught our first Dorado and Lewie pulled it in. One thing that shows the generous and kind character of my wonderful husband is whenever we have a guest on board and we hook a fish, he lets them pull it in. And then he cleans it! And I try to cook it. So far I am better at preparing sashimi than cooking fish thats for sure! 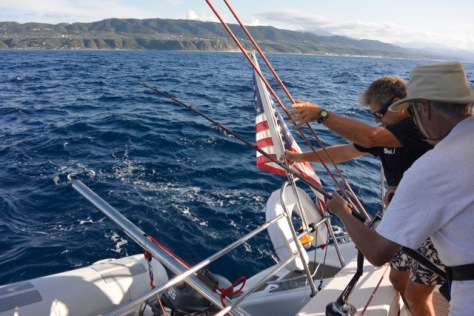 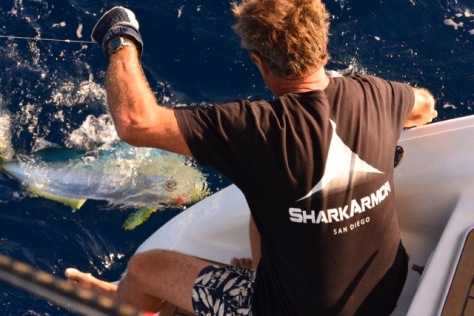 BTW We do not like blood on the decks and always pour alcohol (the drinking kind) in their gills to let them die peacefully but sometimes there is blood all over the place. YUK!

We stopped in Lipari for one night, got a few provisions, and then headed all the way to Menorca. We needed to make tracks to meet up with Lewie’s gang in Majorca.

This squid was found on deck in the morning. We tried to fish with him but no luck.

One day we watched as a little bird tried to catch up to us and land for a much needed rest. We named him Petey, and fed him bugs from the basil plant and water to drink and take a bath. He walked in the butter dish and made prints all over the counter and Lewie commented that if he didn’t survive at least he would be tasty. He slept with us overnight and in the morning took off after leaving poop all over the snorkeling equipment. I guess we fed him well! 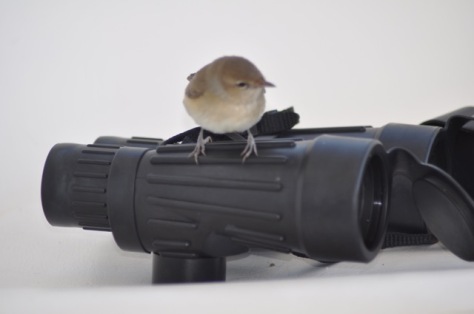 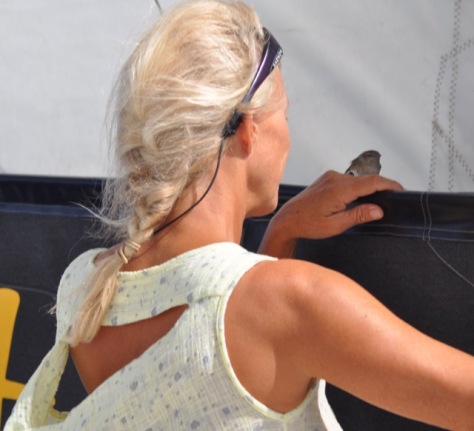 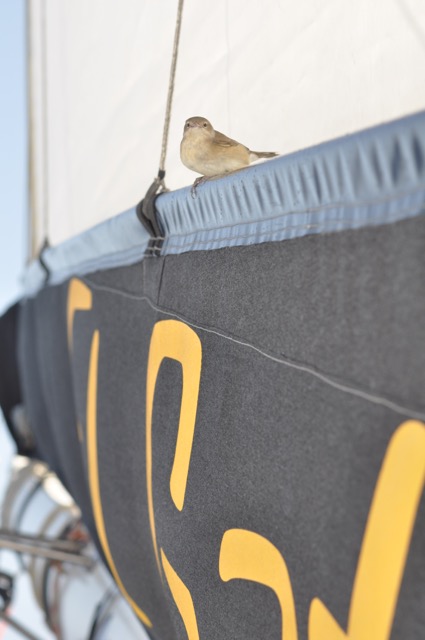 We had our first real upwind sailing on the last day and waves were from every direction making it a very salty ride.  Washing machines are not fun to sail in. Instead of going all the way to Majorca, we decided that we three and El Gato had had enough. There is nothing like a hose with unlimited water to rinse everything and we did just that.  So we stopped in Menorca, in a large protected bay or Calla, called Mahon. Mayonnaise was first made here! Hence the name Mayo. 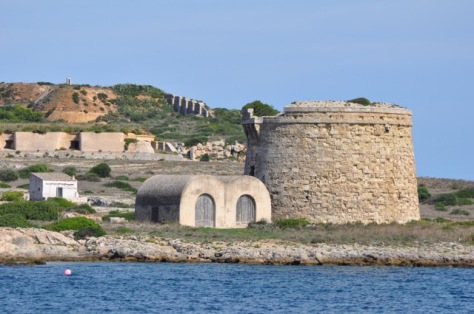 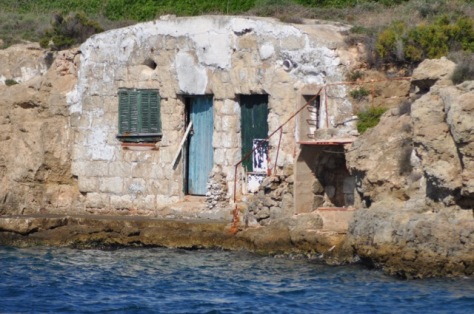 Menorca was special.  While most tourists go to Majorca or Ibiza, this island is the quiet one. 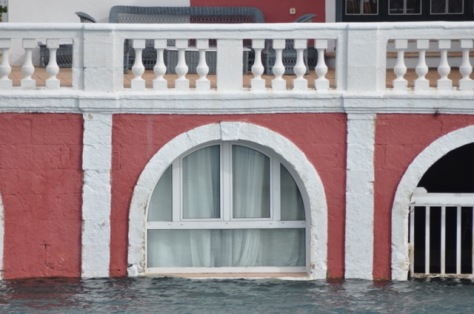 We loved tying up to a floating island that had water and electricity and going ashore by dinghy. 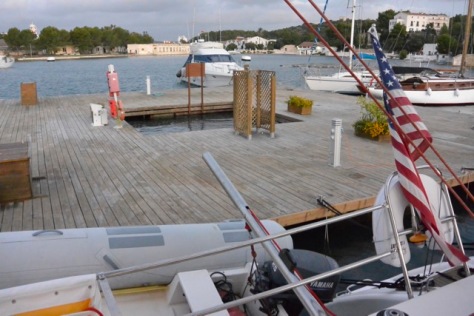 The town lit up at night and strolling down the streets was nice after being out to sea for days and days. 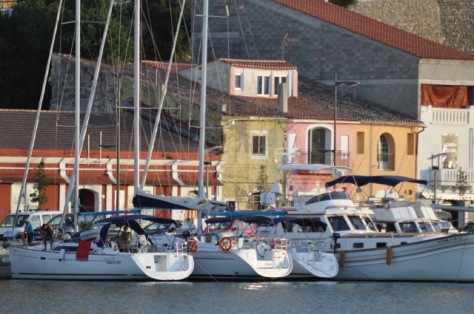 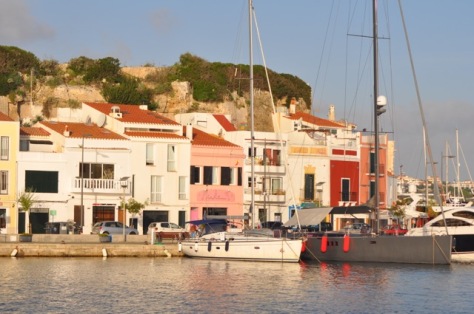 A few days later Eric and I sailed to Majorca and met Lewie who had flown over to meet his wife Marie, and their good friends (ours now too) Brenda and Rick Hall. 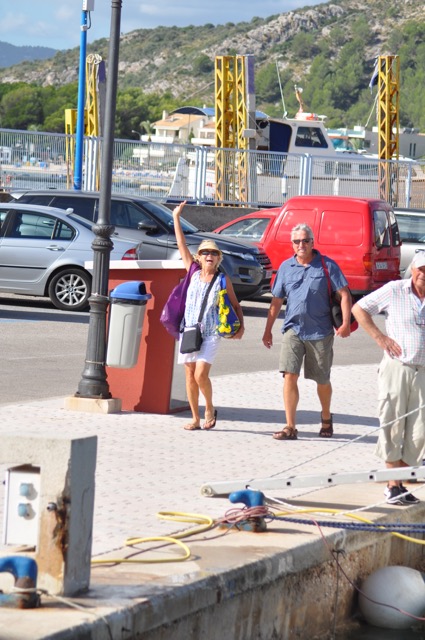 The four of us sailed to a nice harbor called Soller (sun) on the Northwest coast and were pleasantly surprised with on the water concerts by Cuban bands.

A trip by train up to the top was a highlight and shopping for Majorcan pearls was definitely fun! For the girls anyway.  🙂 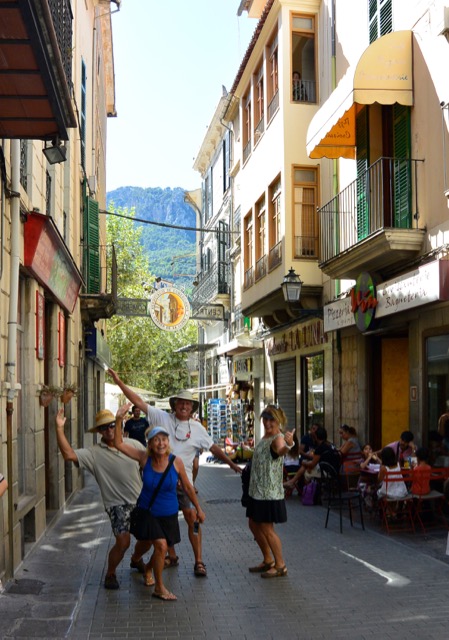 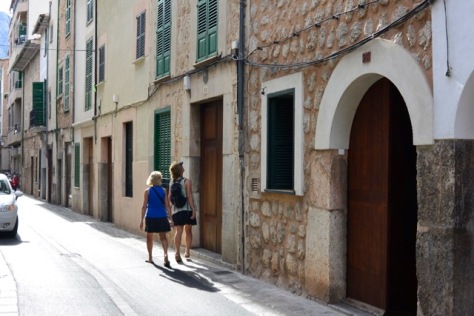 We then sailed on to Ibiza, the party capitol of the world, and got fuel and left. Sorry kids. We make our own parties.

On to Cartagena in the roughest conditions we’ve seen so far. And even though it really wasn’t all that bad it wasn’t what you order up for newbies. But these guys were all champs. No one complained and everyone stood watches and we all were still smiling when we landed.  Even caught some fish! 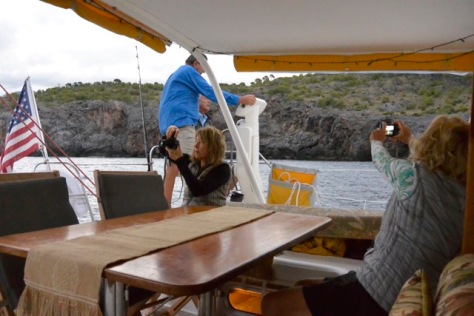 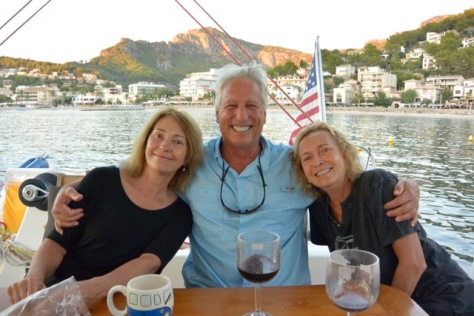 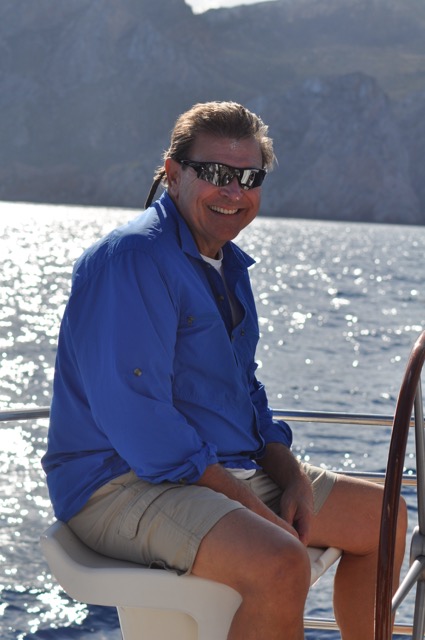 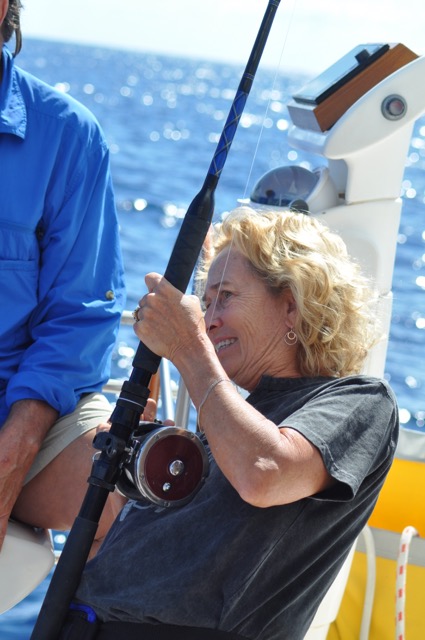 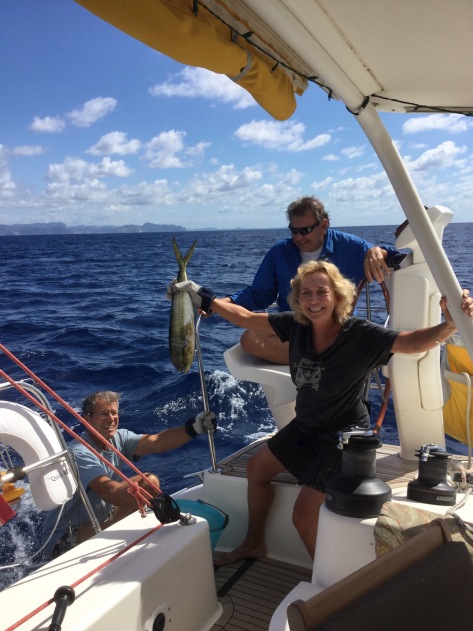 After two days of washing and cleaning and sorting El Gato out, our guests took off for more adventures by land, and Eric and I continued to get organized for the BIG CROSSING. We felt good about where we left our baby, the Yacht Port Cartagena, and are happy to know that a fellow American named Ciera (yes we finally met one) will be keeping an eye on her for us. At 18 years old, she lives on her parents boat while they are in England. And they are all from Texas! Such a lucky young lady to have this experience of living in Spain on a catamaran.

What’s next? Eric and I return with Betsy Crowfoot on Oct 13th and head towards Gibraltar, then the Canary Islands for the start of the ARC+. The weather can be tricky this time of year no matter where you live. So we need to find a weather window and get our butts down to Las Palmas. It’s 1000 miles from where the boat is now.

The ARC is  the Atlantic Rally for Cruisers with as many as 200 boats participating. A new variation in it’s third year is the ARC+ which has an intermediary stop in the Cape Verdes Islands with a few lay days before we depart on the 2nd leg for St Lucia.

The ARC+ starts Nov 8th and we want to be there with plenty of time to not only go to all the seminars and learn as much as possible, but to see the island too! We also should be there in time for Halloween so are looking into costumes to bring or make while there. Betsy is a good friend who I’ve raced with in the Caribbean a few times and she will help us sail to Canaries and then to the Cape Verde Islands. Then she will hop off and Niza Brown, another good friend will hop on. Lewie will do the entire ARC+, all 3000+ miles of it!

We are truly excited about this voyage and once all this darn work of getting ready is over and we are out sailing it will be great!

An adventure of a lifetime lies ahead with good friends on a good boat. 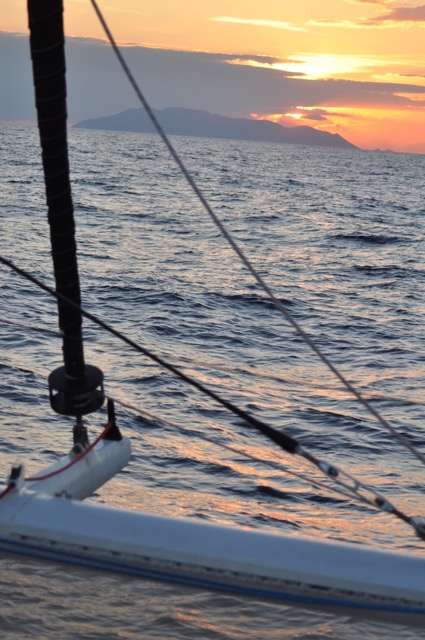 6 thoughts on “Westward We Go!”