Last week we were still in Canet and saw there would be 2 days of “normal” winds before the big bad Tramontanes would return. The thorn in our side told us Monday would be a holiday, and after waiting through umpteen holidays (May is known for that, so is August, December, etc) we made the decision to bolt. If it wasn’t finished, so be it. We would do it ourselves.

We sailed outta there on a Sunday afternoon at 5PM in 15 kts and clear skies.

Ahead was Culibri, a Catana 55 with our American friends Henry, Carol, and John. We chased them down with El Gordo, our big fat reaching genoa, and overtook them at dark which is 10PM now. No autopilot but it was fun taking turns driving and learning our new yacht’s performance.  She is fun to drive!  Our first sunset and sunrise were spectacular and we realized it was also the first time we had sailed overnight together. Very memorable.  Our AIS worked and around 3AM a huge blip showed up named WARNOW. OK so what would You thing about that name when it is on a converging course, you are in the Med, and it is huge – 150 meters? We altered our course, and learned later that Culibri did too. Exciting! It was a container ship tho so no worries. Maybe they saw the movie Cpt. Phillips and decided it would be a good name just in case.

Photos: Sunset and Sunrise on our first overnighter. Still chilly at night.

By 2PM we had our anchor down in a small harbor off Porquerolles (Pork Rolls in American) called Langoustier. Grabbed the bikes and dumped them in El Raton (dinghy is old and looks like a mouse or a rat) and took a short tour of the island.

Wow. Claude, Alex, Riccard and others had told us we should go here and it did not disappoint!
One local sailor said it reminds him of Catalina. One big harbor with restaurants and bars, not too far from the mainland, and everyone goes there. For us it was very different, but that’s because we see it all as European, and there were forts, windmills, and wonderful bike paths that went all over the islands to beaches and coves and vineyards. IT is however very close to the mainland, maybe 10 miles so ferries come everyday and cruise ships drop by as well. Good thing it’s only May so not as crowded yet.

John, Henry, and Eric surveying the scenery starring our two yachts that just arrived at their first port.

Caliber, our sistership from San Francisco, sailed with us to Porquerolles

A quick sail up to Catana’s outpost/charter company in Toulon, where we picked up the parts they promised, and then a long adventurous dinghy ride across the harbor to purchase teak chairs for the back porch.

Toulon is a huge Naval port and we were comparing it to San Diego, except of course it also was very different with forts on the sides, and the mountains right behind.

Back to Porquerolles for another taste of the village and paths, and where we ate our new favorite ice-cream – ginger gelato. We found a restaurant called O Tobago, named after the owners trip to Tobago Cays, Grenadines, on their brother’s cat. Instant friends, we had the Moulles and frittes, pizza, and Med salad. Yum!

Moullin rouge? A good movie and we have no clue what it had to do with windmills. 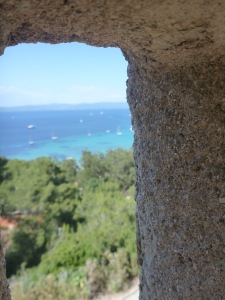 Bikes everywhere. Glad we brought ours. 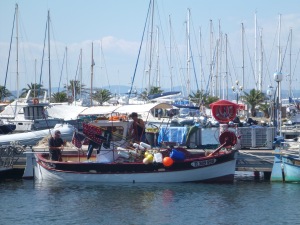 Pretty help at the fuel dock.

On May 31 ( I thought is was June 1 and am learning how easy it is to forget the time, day, date) we left the island to cruise along the south coast of France.  Not disappointed! Found a wonderful spot for lunch, and then headed east until we found another sweet spot. 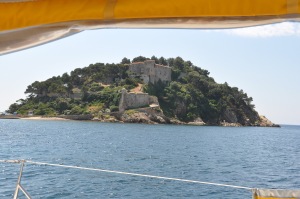 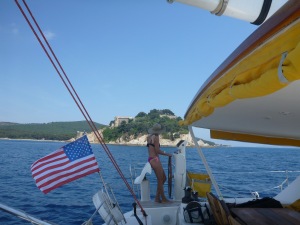 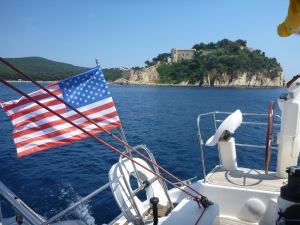 As for El Gato, we are learning everyday, and the list is still long on what we want/need to do, but it keeps us super busy. Eric is McGiver and can fix just about anything and before leaving he installed our new chart plotters for the helm stations, and the auto pilot which now works just fine. All in all the systems on a 15 year old boat are working really well. There is a mix of new and old, and we expect to be fixing and upgrading along the way. But as we’ve witnessed, even new boats need a lot of TLC and work to get things right.

Our view this morning. Breathtaking.

Bottom line is living on a boat is AWESOME, as good as we have always hoped, and maybe even better. We are learning and loving it every step of the way.

2 thoughts on “The horses are out of the barn!”