The Passage to Mexico

Departed at 0700 on a beautiful day.  John  Forgrave brought a beautiful fishing rod as a gift  and the boys caught 2 Mahi Mahi’s, at the same time! 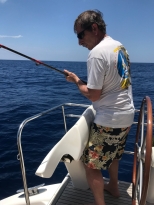 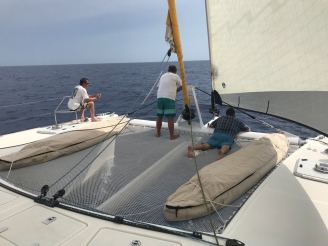 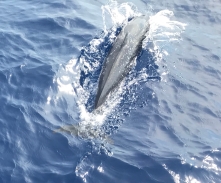 Had to bring in the lines – too much Sargassum weed getting caught on the hooks.

Shrimp and grits for dinner.  Made Banana Bread for tomorrow.  Pesto pasta for lunch.

Nice evening with no storms. YAY!  In the summer months the storms become obnoxious.

Day 2 – Most memorable thing – I made sushi for lunch and soon afterwards Tom and I got sick.

I had Mahi Zumas revenge but Tom had it coming out both ends. NOT a good thing for a long passage.

The funny thing was I served lasagna for dinner and Tom, AKA Walkie Talkie, was hungry so he ate a big helping and promptly hurdled off the stern.  Then he returned to the table and served himself up another plate!  OMG that man loves his food!

The queasiness stayed with us and I was physically weak but alert and floated on watches to help navigate and cook, staying on deck curled up in the fetal position all night with Juan or Eric on helm.  Tom was toast so we left him off watch.

John finished his graveyard shift around 3 AM and informed Eric and me that a cruise ship was on AIS and headed our way (obviously leaving Mexico and going back towards the states).  BTW they look surreal at night, humongous and all lit up like a world of it’s own and one can only imagine how strange that would be if it were transported back in time – it would be straight out of a SciFi movie! As they got closer it was not as simple as heading up or down to avoid it.  On radar we detected a squall on our port quarter trying to overtake us, a large storm cell about 4 miles in front of us going port to starboard, and the Gulfstream current was pushing us sideways to starboard at 4 knots (into the ships path).  Working hard to stay out of their path we opted to put in 2 reefs just case a squall hit us at the most inopportune time – next to the cruise ship.  We wound up having only 1/2 mile between us.   Then we headed up and slowed down to let the big cell pass in front on us.  Our tracks had us doing circles in the stream.  The boat was headed one way and going another.  True vertigo.  If we had been pilots we might have crashed. That happens unfortunately.  You must trust your instruments and sometimes that’s really really hard.  It was bizarre and felt like an episode in The Twilight Zone.

Circles in the Gulf Stream

But it worked and the cell not only passed in front of us but dissipated as well.  Whew!  This is why you never let your guard down while on watch.   Shit happens – mostly at night.

Other cells were out there but nothing came close.  That was by far the weirdest situation we have ever encountered.

We tend to keep the boat on autopilot at night and when its calm and we are way offshore and not in a traffic zone we do a visual check every 5-10 minutes.  In more challenging conditions such as these, and in busy areas we are diligent in watching radar, AIS, and using our eyes and ears to keep a careful watch on things. One person awake and alert while on watch with the other(s) resting until their turn.  Depending on how many onboard (we prefer 3-4 for long passages so we can rest more) I’ll make a watch schedule and post it in the galley.  We cross off our names after our watch because after a day or two the time becomes a blur.  We need to look at that list often to know who is next and how long we can rest. Three hour watches has worked really well for us. Some people do 6 hour watches when it’s just the 2 of them but so far we haven’t tried that.  But when it’s just me and Eric we will let the other sleep in depending on how rested we are and how hard their watch was.

The stream continued to be strong at 4-5 knots and we used engines to keep the speed and go the right way.  Sometimes the difference between our heading and COG was 30 degrees. Like crabbing sideways.

Turns out that relatively narrow area between Cuba and Mexico is one of the strongest currents in the world.

Arriving in Isla Mujeres around 13:00 we tied up at El Milagro Marina, a quaint marina with a tiny beach, a tiny pool, parrots, palm trees, a movie room with AC, internet (even from the dock), a community kitchen and dining area outside, and a community vibe including the staff that makes a good place great.

The owner, Eric Schott who is actually a bit shy

hails from Santa Barbara, CA, and after too many divorces he headed south and brought his mom too. 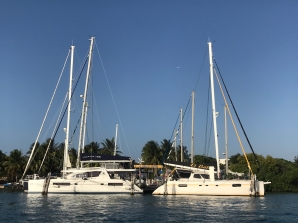 He built El Milagro 14 years ago and did it well.  All tiles, ambiance, happy employees and customers. We celebrated our anniversary with him and his crew and right before we departed he gave me and Eric a sweet compliment saying we were the coolest couple to ever stay at his marina.  He probably says this to all his easy customers.  LOL.

Thank you Cindy for sharing this marina info with us!  It was very special in a million ways! 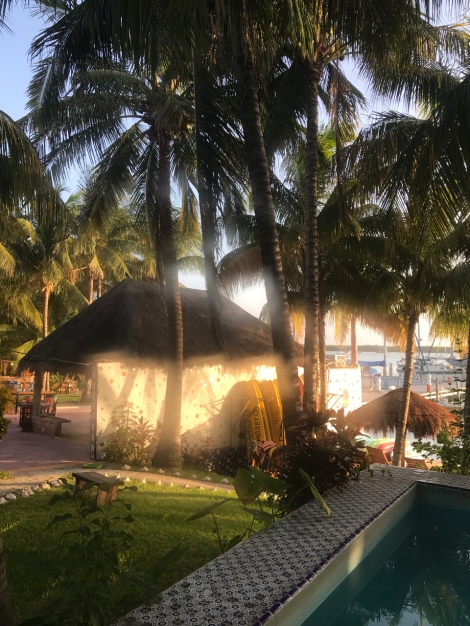 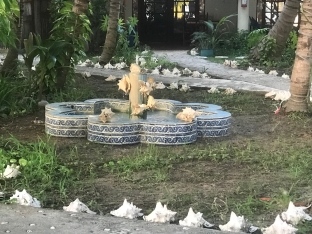 Whale sharks are frequent visitors to this area of Mexico and Isla Mujeres has many tour boots that take tourists out to swim alongside them as they feed. We didn’t go for it.  The seas were building, it would be a 45 minute ride on an uncomfortable pong with other guests throwing up, and they throw you in the water while the whales swim by and you must wear a PFD.  WAY too touristy for us.  Hoping we find them in a much more natural setting and swim with them.

Amazing how much my dress matched this tile mural outside the marina!

Our crew hopped on provided Milagro bicycles and took off in search of scooters so we could tour the whole island.  It’s only 5 miles long. 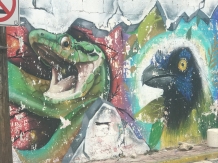 Eric brought along El Gato stickers and placed them in strategic spots. 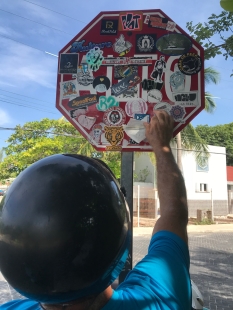 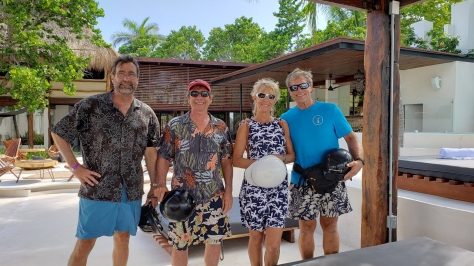 We headed to the south end in the dark getting lost only once. A few days later we retuned to visit the area in the daylight.  It was spectacular. 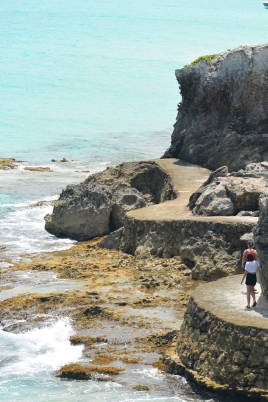 Back to town for a delicious meal. Toms idea for ordering one meal at a time and everyone sharing, then the last meal something everyone agreed was the best to be ordered again was a hit.  To top off the meal some street performers demonstrated their skills doing acrobatics to the rhythms of drum beats.  Then one of the nicest voices we’d ever heard serenaded us.  It was lovely. The finish of the perfect dinner was vanilla ice cream topped with Kahlua. It was so popular with our group that we bought 2 bottles and filled a flask to bring to ice cream stores in the future!

Like most places called paradise, Isla Mujeres has changed a lot. My last visit in 1982 when I skippered an (almost) all female crew on a 54’ monohull called Huntress. We had one man, a journalist named Bob Payne who put the whole deal together. Bob wanted to get the perspective of being the only member of the opposite sex onboard. Back in those days it was hard to find a woman on any race boat let alone a boat full.  Since I had just raced in the SORC for my 2nd year as skipper of an all female team he was inspired.  Bob volunteered to be our cook, another role reversal, and promptly tried to learn how to cook.  It was a hoot, we lost weight, were first to finish, won the race, Sail Magazine published his story, and everyone celebrated yet another milestone for women sailing. It was a bonus that Isla Mujeres translates to Island of Women.  I was 23 at the time.  Looking back it seems I was a mere child who knew no boundaries. Invited by the Mayor of Cancun I stayed for the Mexican Windsurfing Nationals hosted at Club Med, and won the title but not the Windsurfer board that was the prize as they gave that to the first place Mexican as they should. I did however receive a really cool trophy to add to the collection of Isla Mujeres trophies. They take great pride in their prize givings and some of the trophies were gorgeous.   The Nationals were really fun until the mayor practically kidnapped me.  That’s another story. I was scared and locked myself up in my room at Club Med.  I wrote letters back home just in case I disappeared.

Meanwhile Huntress sailed back to Florida and her keel almost fell off.  I guess we were all lucky to survive that week.

Anyway, after the guys departed, Eric and I rested a lot and returned to almost normal sleeping patterns.  It’s tricky to sleep all night after being alert for so long and also being in a new place with new sounds.

Different restaurants every night as we can never get our fill of  good Mexican food!

On Hidalgo Street we found El Patio with live music so we did the “white man dancing” routine.  This is what I call Eric’s moves.  LOL. I love that he does not care what he does or looks like – he loves to bust out his moves with pure abandon – the same ones he learned in junior high.  The music was great and before long the dance floor was full.  Sorry, no photos.

Day after day we waited for a weather window but it never opened.  The forecast called for 30 knots around Nicaragua and the seas were building.

So we made a new plan.

One that would avoid pirates and weather.

That’s in the next blog, coming soon!