March 31st, 2017 marked the 100th anniversary of trading 25 million in gold for what is priceless! St Thomas, St Croix, and St John lay between the Spanish Virgins and British Virgins and each island, like all islands, has it’s own colorful history. 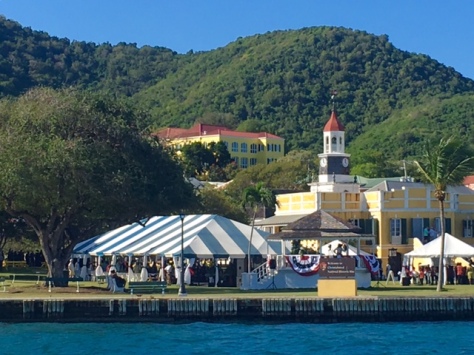 Alexander Hamilton, one of our founding fathers was born on Nevis, a nearby Caribbean Island, and in 1767, when he was 8, his parents moved to St Croix. His dad left, his mother died, and as an illegitimate orphan he became a clerk. Locals saw his potential and sponsored him to go to school in the states. Imagine this… he was shot in a duel by the Vice President of the United States.  I hate guns. A punch in the nose might have been sufficient in getting the point across.

Camille Pissarro was born in 1830 on St. Thomas to Jewish immigrants. There is a good read called A Marriage of Opposites that tells his story.

Athletes:
Many professional boxers and baseball players were born here. Two famous sailors were born on St Thomas. Peter Holmberg won a silver medal in the 1984 Olympic Finn class, was on top of the world in match racing and continues to drive or do tactics on super yachts, and the new hero here is Taylor Canfield. Taylor has been the #1 ranked match racer In The World for the past 5 years and has his sights on the America’s Cup for future endeavors. Go Taylor!

Rich and Famous:
Richard Branson, founder of Virgin Group (records and airlines, etc) owns 2 islands in the BVI’s close to Virgn Gorda. He hosts friends and celebrities alike. Recently he had a contest with Obama.
“We decided to set up a friendly challenge: Could Barack learn to kitesurf before I learned to foilboard? We agreed to have a final day battle to see who could stay up the longest,” Branson wrote in a post on Virgin.com.

“We were neck and neck until the last run on the last day, when I got up on the foilboard and screamed along for over 50 metres, three feet above the water,” Branson wrote. “I was feeling very pleased with myself, only to look over and see Barack go 100 metres on his kiteboard! I had to doff my cap to him and celebrate his victory.”

Golf or kitesurfing. Both are good sports but I prefer a president who is athletic and brave enough to fly with the wind! You can’t beat that smile either. Nuff said.

Actors:
Kelsey Grammar who is best know for his role as Frasier on Cheers, was born in Charlotte Amalie, St Thomas.

Religion:
When you die, if you were a really good woman in your lifetime you will be given your own island full of male virgins. Agh! I think I’ll stay badass.