Tip #1: There are two kinds of captians in the Bahamas. Those who have run aground, and those who are going to run aground! We are somewhere in between with a touch.
Tip #2:  Having a grill helps keep the heat outside the boat!
Tip #3:  Air Conditioning is extremely refreshing when there are mosquitos, rain and the temp outside is making you sweat!
Tip #4 Have your deck brush ready when you see a shower approaching.

We really enjoyed getting to know our teaching charter guests Michael and Lisa Britt. Sharing the stoke with a couple who want to throw off the dock lines is exactly what we love!  In a few months they will be cruising from San Francisco to Mexico, including participating in the Baha Haha, with stops in California along the way. Owners of a Catana 471 named Footloose, very similar to ours, made it fun and rewarding to sail together.  Lisa is an experienced golfer embracing this new world of sailing with Michael, who is a life long sailor and always dreamed of setting sail for distance horizons. When they met, it was magic so they sold the houses and bought a cat. They read about us in Latitude 38 and booked a charter to see what they could learn from us before embarking on their own great journey.
We flew the spinnaker, used satellite navigation, tried not to run aground, worked on weather routing, caught fish, taught how to make sushi, and improved Lisa’s SUP skills among other things.  Lots of good times, laughs, sharing tips and we learned a few tricks about Catana’s from Michael as well! 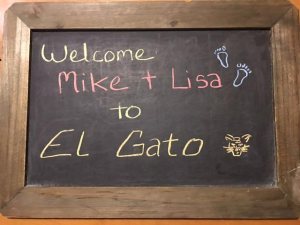 As for the islands, everyone who’s been there knows the Abacos are special. Only 200 miles from Miami and you are in an archipelago of small islands, each with it’s own history of families that helped develop them.

First stop was Hope Town on Elbow Cay. This light house is unique and beautiful with a view of the Sea of Abacos and the Atlantic Ocean. It has Fresnel lenses and recently used a kerosene burner for the lamp. The view from the top was fabulous and we got a good look at the island and the boat. 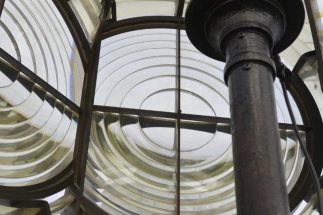 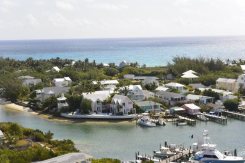 We met several Albury’s on Man O War, including the oldest living gentleman who kept talking to us from his balcony, even while we politely crept away.

For Guana Cay,  we were told Nippers Pig Roast on Sunday is a tradition and should not be missed. Reminded us of a cross between Willy T’s, Foxy’s, and Key West. Another excuse for folks to drink too much and dance. We watched the locals and tourists bump and grind, took photos and after one look at the food, skipped the pig to go back and have homemade Moussaka.  Mmmmm 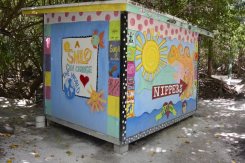 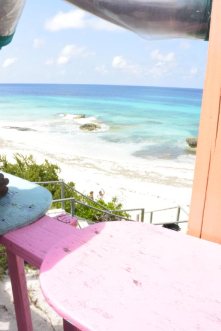 On Man O War we rented a golf cart and discovered a very interesting tree. 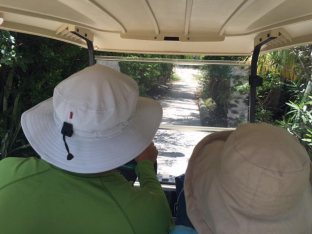 In Little Harbor, our last stop before departing,  we took a mooring, did some SUP exploring, beach combing, and checked out Pete’s Pub, the small island bar with locals and boaters congregating. It was Cinco de Mayo, and Eric and I celebrated our one year at sea anniversary with Michael and Lisa!

When it was time to head towards the states, I had mixed feelings. As excited as I was to be heading “home”, it also meant this was the end of our foreign adventures, or at least it will be until next winter.

Michael and Lisa caught each caught a Barracuda as we were leaving the Bahamas. 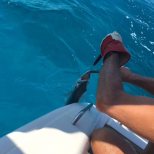 We sailed into Miami at twilight threading the channel between the famous Stiltsville while watching the Miami skyline come to life. Like any big city, they look best at night when all concrete fades away and the multi colored lights display shapes and location.

Currently on a mooring at the Coconut Grove Sailing Club, we couldn’t be happier. We’re next to a small island where we often see, and sometimes at night hear the dolphins swim by. Neighbors are friendly, and Fresh Market is a short hike away. West Marine – OMG! It’s culture shock to have so much readily available and reminds us how much the USA knows how to produce, sell, and get er done.

Next week we start cruising north before the official start of hurricane season June 1.

Until then we hope to see as many friends as possible and our dance card is quite full!